With many optical illusions, we’ve harnessed the trickery of the eyes and brain for our own entertainment. We’ve discovered that certain kinds of visual deception can be replicated, providing fun results. But how do they work? From that viral dress to the trippy posters you can buy in gift shops, here’s the science behind optical illusions.

What Is an Optical Illusion?

The term optical illusion is broad: it essentially covers any image that tricks your brain into seeing something other than what’s actually there.

Optical illusions can exist “in the wild” (for example, a mirage that causes you to see water where there is none). However, you’re much more likely to run into a manufactured one, online or in print.

The images that cause optical illusions are just a little bit outside of what your brain can make sense of. In its confusion, your mind tries to interpret the image as best it can, which is how you end up seeing things that aren’t there.

When it comes to understanding how the five senses work, we have a pretty good idea of what goes on—until the sensory information reaches the brain. From that point forward, scientists still have a limited understanding of how the sensory input gets translated into something that can be understood.

Because of that limited knowledge, we still don’t fully know how optical illusions work, which is part of what makes them so fun! Still, we do have some pretty good ideas of what may cause this effect. Here’s what we know so far about how different types of illusions work.

In nature, optical illusions typically are caused by the way the atmosphere interacts with light.

The mirage example, which is the one you’re probably most familiar with, makes water appear on dry land during a hot day and is a type of “inferior mirage.” These mirages don’t just trick your eyes alone—you can actually capture them in a photo.

When the warm air and cool air are reversed, you get a superior mirage. This causes part of an image below your line of sight to appear above it. The conditions for a superior mirage often happen over large bodies of water.

If you look across the ocean when the conditions are right, for example, it can look like boats or other objects are floating in the air. An uneven temperature inversion can also create a Fata Morgana, which mixes both kinds of mirage and often looks like a floating structure or building on the water.

In these illusions, geometric shapes create an effect that looks warped or otherwise strange. One reason for these effects seems to be something in our brains called lateral inhibition, in which specific neurons respond to lines in specific directions. When one neuron is activated, the ones near it get deactivated, making it harder for us to interpret the orientation of lines that are close together but go in different directions. Look closely at the image above, and you’ll be surprised to discover that the lines are actually parallel.

However, for the most part, we don’t have such clear-cut theories to explain how these illusions interact with the brain. What we do know is that our brains interpret two-dimensional images to fit a three-dimensional world, which is why many optical illusions work so well. What makes sense in three dimensions often doesn’t work the same way in two. Our brains can’t see the “real” image well because they’re trying to fit the image into a 3D concept of reality. 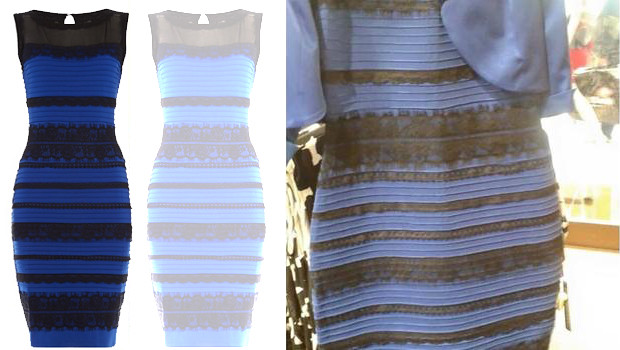 Finally, some optical illusions are based on color, and yes, the easiest example is of that dress that went viral online. No one could decide if it was blue and black or white and gold. But don’t colors look the same to everyone?

As it turns out, they don’t. The color we see has a lot to do with the lighting we see it in. For example, look at a red shirt in a dim room, then shine a bright flashlight on that same red shirt. The change in light changes the visible color drastically. But, because you know what sort of lighting you’re seeing it in, your brain can accurately figure out the actual color of the shirt.

When you look at pictures, your brain looks at both the color of the image and the lighting suggested in the image to figure out what color is represented. In pictures like the infamous dress picture, though, the source and type of lighting aren’t obvious.

Lacking that information, your brain tries to interpret the color anyway—and may get the answer wrong. Different people’s minds will land on different lighting interpretations, resulting in these color-based disagreements. (By the way, the dress was blue and black.)

Although optical illusions trick us, we tend to enjoy them because they’re interesting and harmless. When it comes to more serious matters in life, our brains can usually interpret what we see accurately, so when we see an illusion, we can relax and enjoy it.

But are other sensory illusions more nefarious? We’re covering the ways all of the five senses can trick us, so check back soon to learn about the different ways our brains get fooled by our senses.